Howdy. My name is John Lamont. I guess I have always been fascinated by the Mexican guitarrón, the bass instrument in a Mariachi band. I was a missionary in Mexico and brought one back in 1964. I proceeded to make it more playable by changing the strings to some heavy guage Gibsons, making a fingerboard and putting 9 frets on it. It played. It sat. I am a guitar player, singer-songwriter and I would have to wait until I married a bass player in 1971. “Rose Sharron” and I switched to singing only cowboy/Western music in 1990. The best bass available at the time was the Martin B-40, a solid wood, D-28 appointed small body with a long 34” scale neck. It is a beautifully made instrument. wait until I married a bass player in 1971.

We were happy with this set up because we always plugged in. It wasn’t until we played in Heber City, Utah in 2003 that we heard and were blown away by David Jackson playing an old Ernie Ball Earthwood bass miced through an Elvis-vintage Shure. Now THAT was a bass sound! I asked David about finding us one and he said they were hard to find. He said he was going to have one built in carbon graphite that would be much better. I checked back with him two weeks later and he said it was still in the idea stage. I offered to help. Two weeks later I delivered two guitarrones from Paracho, Mexico to have Steve Mosher of Moses Graphite Inc design and install one of his necks.

“This is the most beautiful guitarrón I’ve ever seen,” said Timothy B. Schmidt of the Eagles. The top soon started collapsing, however. The problem is that the tops are made of a Mexican wood called Tacote, with no bracing. It is a flexible wood prized by Mariachi players that is similar to balsa. We are re-doing the top with our scalloped, forward shifted X bracing and are bidding out the build at this time. I call this our Lamont Boatback, ‘cause that’s what the back looks like—a boat!

I pursued a carbon fiber bodymaker even with a race car body building company but the molds are VERY expensive and each body alone would cost $2,000! It finally dawned on me that the people out there looking for an Earthwood were expecting one in wood. I proceeded to try and “crack the code” of its construction to see if I could have one made.

I bought a 3-piece mirror from Stewart MacDonald, located Denny Croy, an Earthwood owner in Santa Monica. We drove down there, 6 hours, and were granted a 30 minute look-see for photographs before Denny’s next bass lesson at McCabe’s Music. We went to extreme lengths to find out how the Earthwood was made.

I got to meet Ron Saul at this time. He was the original engineer Ernie hired to improve the Earthwood in 1974. He and Dan Norton went to work to diminish the size of the bass from 8” to 6”. They found it had more punch and was much easier to play. Ron became my mentor and for the last ten years has encouraged me and given me ideas on how to improve this bass.

I obtained an Earthwood neck and neck block from a smashed bass and one of our cowboy singer friends, Judy Murbach, VERY graciously lent us her Earthwood to copy. I found a luthier in Moab, Utah, Dave Montgomery, who was willing to copy the bass as close as possible. (He did use solid Walnut instead of the laminate Walnut/Holly/Walnut that the original used.) It sounded great! It only weighed 7 pounds and it boomed. It had tremendous sustain in part to the bronze wound strings we used.

The first time Dave looked inside at the bracing of the Earthwood he said, “Huumm?” I asked what he was thinking. He said, “It is interesting what they thought was good bracing technique in 1972.” A few years later I asked Dan Norton what was the deal with the unique bracing. He said that Ernie and George Fullerton just started adding popsicle sticks in a radial pattern. When the top stopped moving, they took some back off. These braces are light but do not connect and have been the cause of top and bridge failure on some of the basses.

Dave asked if he could make another bass but use luthier “tried and true” methods in a scalloped X brace pattern which is much stronger and still allows the top to move. One very important key is that the bridge is placed in the “sweet spot”, right in the center of the lower bout for maximum movement. Dave finished the second bass and we compared it to Judy’s original and to our first copy. The definitive answer was they were the same in producing the wonderful bass fundamental we were after.

I decided to produce this bass using our own bracing, headstock, bridge designs and solid woods. We changed the top dimensions slightly to 18” x 12” x 14” x 25” by 6”. We include a monitor port and a Fishman PreSys EQ/Tuner for “moving off the porch onto the stage.” So we don’t see the Lamont Flatback as a copy of the Earthwood but as a real improvement using lutherie advances since 1972. “We start where the Earthwood stopped.” I look at the Lamont Flatback as the successor to the Earthwood and the only acoustic bass guitar that really sounds like a bass unplugged.

Through MANY ups and downs we have finally succeeded in bringing this bass back to the market and I took the first four instruments to the NAMM show in 2014. Sometimes “overnight” success takes 10 years! Steve Mosher made a “killer” Tree of Life carbon graphite neck with 150 pieces of Mother of Pearl and Abalone and our luthier at the Custom Shop, Craig Wickstrom made a solid California Claro Walnut body with Maple binding. It is stunning!

We walked up to Steve’s booth at NAMM and met Wade Craver from bassx.com. Upon seeing and playing the bass he said, “we come to the NAMM show to pick the most innovative and new bass idea to give it an award, I think we just found our winner!” He was speaking of Steve Mosher’s wonderful graphite products including our bass.

If you are looking for a REAL acoustic bass guitar, one that sounds like a bass unplugged, skip all the hype and get an Earthwood. If you can’t, please consider a Lamont Flatback. You won’t be disappointed. 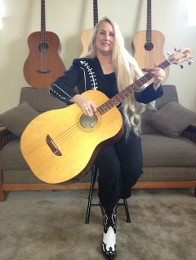 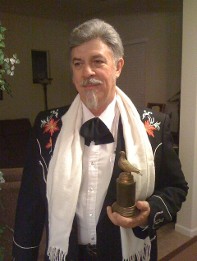 Contact us to start designing the guitar of your dreams.